Wall paintings of All Saints, Shorthampton 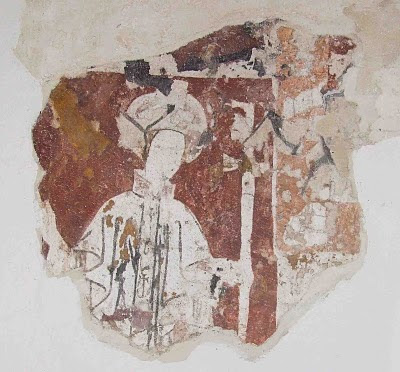 Because so many images in English churches were destroyed in the 17th century, English wall paintings are mostly fragmentary. What were once entire cycles of images, showing, say, the story of the Passion, are now reduced to a few scraps; a large Last Judgement may be recognisable only by a small group of devils; a feathered wing may be all that’s left of an angelic host. As a result, what survives has a quality of serendipity, and often, divorced form its context, of surprise. At Shorthampton we are treated to a dragon’s wing (presumably all that is left of a painting of St George), a Last Judgement so faded as to be virtually indecipherable, and images showing a bishop (above) and of various saints, not all identifiable but remarkably including St Zita, patron of domestic servants and a far from common subject. 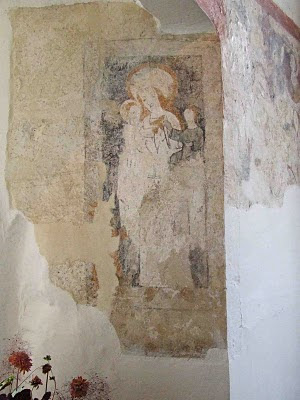 And then there is this unusual subject, the Miracle of the Clay Birds. This is the story of how the infant Jesus modelled some birds out of clay and then brought them to life. If it’s unfamiliar, that’s because the story is told in one of the apocryphal gospels, that of St Thomas. At Shorthampton, although the painting is faded, the Virgin, the infant Jesus, and another child – perhaps John the Baptist – are clearly visible, along with one of the birds.

It is indeed surprising that in this tiny, isolated church, up a lane with just a few farms for company, this obscure story should be portrayed. But miracles fascinated the medieval artists, and miraculous episodes from apocryphal narratives by James, Thomas and the ‘pseudo-Matthew’ (all gospels that satisfied an understandable craving for information about the infancy of Jesus) appear in various churches. No doubt many such images have been lost. It’s a small miracle in itself that in this Oxfordshire church such a painting has survived.